How to Install Google Chrome Extensions in Microsoft Edge

How to Install Google Chrome Extensions in Microsoft Edge

Microsoft’s new Edge browser built on Chromium is now available—in beta. But by default, you can only install a small number of Microsoft-approved extensions. Here’s how to install extensions from the Chrome Web Store in the new Edge.

Microsoft is beta testing a new version of Edge that dumps their rendering engine in favor of Chromium, which forms the basis for Google Chrome. Chrome gets better battery life and the new Edge gets Chrome extensions. Microsoft hosts some Edge-specific extensions, but only about 100 of them. That sounds like plenty, but when you throw out duplicated functionality and do-little extensions (like the Microsoft Personal Shopping Assistant), that list dwindles. It’s growing, but compared to the Chome Web Store it’s pretty small.

So, if you’re using the new Edge and want more browser extensions, you can install them from the Chrome Web Store. And that’s great, because even when an extension exists in both the Edge and Chrome store, sometimes the Chrome version works better or has more features. For example, we can’t get the Grammarly Edge extension to sign into an account to unlock Premium features. But the Chrome extension installed on Edge works just fine.

How to Install Chrome Extensions in Edge

Installing Chrome Extensions on Edge is a straight forward affair. First, click the three horizontal dots in the upper right corner of the browser to open the menu. Enable the “Allow extensions from other stores” switch in the lower left-hand corner of the Extensions page that appears. Microsoft will warn you that it hasn’t verified the extensions in the Chrome Web Store or anywhere else online. Click “Allow” to continue. 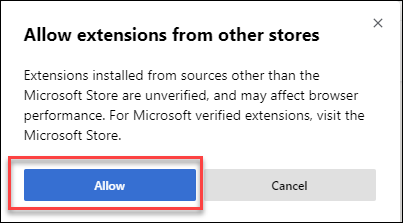 Now, browse to the Chrome Web Store and find an extension you’d like to install. All you have to do is click “Add to Chrome.” Remember that any extensions you install from the Chrome Web Store weren’t tested for the Edge browser. You may experience bugs or other breakages. It may be wise to install one extension at a time and verify you aren’t experiencing any problems before moving to the next extension.